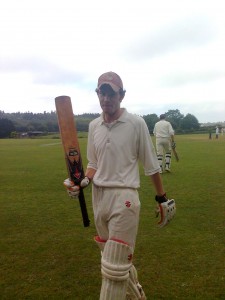 against a youthful and inexperienced Whitchurch team

Skipper Carter had batted at number ten in the previous match and his decision to open the batting proved to be a masterstroke.  Renowned for his thinking outside the box, Carter said his plan was to protect the top order batsmen.  The top order batsmen suspected he’d spotted an opportunity to fill his boots against a benign bowling attack.

Although the run scoring wasn’t easy on a damp, slow pitch the pair didn’t have much trouble accumulating runs.  Sugden was the more free-scoring but Carter backed him up well.  Sugden celebrated his fifty with a big six over the bowler’s head and continued playing impressively, particularly on the offside.

By the mid-point the pair had put on 126 and were enjoying themselves in their contrasting styles- Sugden playing stylishly and Carter, more bludgeoning in his approach.  It was a surprise when a wicket finally fell when Carter was caught at mid-off off Poole in the 27th over. 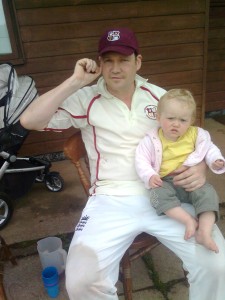 Mike Jarvis, normally an opener, had been like a caged lion waiting to get to the crease and wasted no time unleashing himself onto the bowlers with his customary vim.  The slow outfield required the batsmen to do a lot of running and Sugden, on 99 and visibly tiring, hit the ball straight to mid –off but the chance wasn’t held and he competed a fine maiden century. He was finally caught for 113, which included 10 fours and a six.  Gavin Colegate grafted for 15 before being caught and when the 250 came up Carter made the declaration leaving Jarvis on 46 not out. 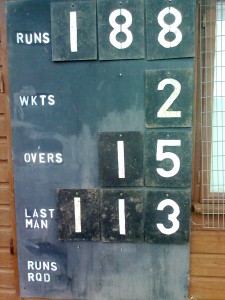 When Whitchurch batted Pete Glen (2 for 16) took two early wickets- Jarvis caught Towl at silly mid off and Glen caught the experienced Andy Alford off his own bowling.  D&T were then held up as the youngster Bone batted very correctly along with Whitchurch skipper Bob Powell.  Powell was particularly dogged and some of his defensive shots were akin to French Cricket, standing in front of the stumps to kill the ball.  The pair lasted thirteen overs before Liam Bligh got the breakthrough bowling Bone (9) with a fine delivery.  Powell found another willing partner in Poole and the pair took the score to 88 before Tom Petherick got the important breakthrough when Dan Goord caught Powell for 36.  Whitchurch then collapsed to 91 for 7.  Carter (2 for 9) struck twice in one over trapping Poole lbw for 14 and the bowling Dunne for a duck.

After Goord bowled Webber, Derbyshire (22) struck several lusty blows before Petherick ( 2 for 23) bowled him with a beautiful turning delivery. Goord (2 for 15) finally finished things off when Taylor stumped Vernon to give D&T a comfortable victory with 9 overs remaining.