Friday night saw the Royal Seven Stars Hotel host the annual Dartington and Totnes Cricket Club Awards dinner and celebration of the season.  However, this season there was added reason to celebrate after the First Eleven’s astonishing season which saw the side remain unbeaten all season, amassing more points than any other team in an eighteen-game season in the Devon Cricket League’s history. As winners of the C Division West league, the club will play in the B Division next season.

Club Chairman Mick Rusling summarised the season which also sadly saw the second eleven relegated while the youth section continued to flourish under the enthusiastic leadership of Kevan Throgmorton.

One of the highlights of the year was the all-round performance of South African Phil Snyman whose total of 1162 runs at an average of 83 saw him as the division’s leading run scorer and he deservedly won the club’s First Eleven Batsman of the Year award. The bowling award was tightly contested with six bowlers finishing in the top 10 of the division bowling averages. Jono Colegate was the man to pick up the award for taking 39 wickets at an average of 7.23 as well as scoring 394 runs with the bat.

The most improved award went to Alex Perkins who has stepped up to adult cricket well and will hopefully continue his development next season. Alex Hartridge won young player of the year for his impressive all-round performances for the first team. Hartridge, who is a professional footballer for Exeter City, took 15 wickets despite only being available for 7 matches as well as taking some superb catches in the field.

Fielder of the year was awarded to wicketkeeper Alex Winch for his 18 catches and two stumpings for the first team. The final two awards, both voted for by the players and club members at the dinner were Clubman of the Year and Player of the Year. The former was given to Gavin Colegate who has stepped up to become groundsman this year. As well as spending hours looking after the pitch, he has captained the second team, played and umpired for the first team and help lead the club’s fundraising efforts with regular barbeques.

The final and most coveted award, Player of the Year was picked up by Snyman for his runs, wickets and overall impact on the club. In his acceptance speech, he dedicated the award to captain Harry Baxendale who in his first season as captain led the team to the title, scored 303 runs and took a division leading 43 wickets.

As a token of the club’s appreciation for his efforts during the season, a presentation was made to Phil Snyman, accompanied by a wish from everyone that he might return to play for the club in the 2020 season. 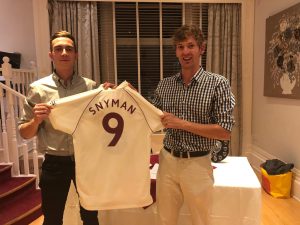 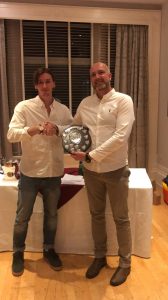 Gavin Colegate Clubman of the Year

Jono Colegate Bowler of the Year