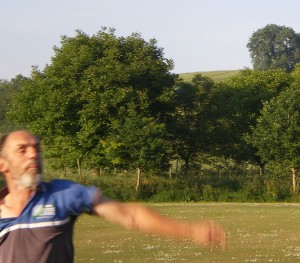 Plymouth Civil Service III 81 all out, Dartington & Totnes III 84 for 4

Excellent  bowling by Dartington & Totnes enabled them to skittle Civil for 81.

Inspirational skipper Myles Sydenham won the toss and asked Civil to bat.  Liam Cotton and Jeff Cornish led the attack with Cotton striking in his first over, bowling Piddock off his pads for a duck.  Richards and Ellard dug in but struggled to score runs against accurate bowling.  The batsmen were repeatedly beaten outside of off stump but failed to get an edge.  Cotton took 1 for 6 in his six over spell but if Civil were hoping for some light relief when he came off they were out of luck- Mick Rusling’s first four overs going for just 2 runs.

The introduction of Griffiths brought the next breakthrough when he had Richards (8) caught by Thwaites in the twentieth over with only 28 runs on the board.  Next man Reed produced a flurry of runs, wielding the long handle and would have had the scoreboard ticking over-only Civil didn’t have a scoreboard!  Rusling had the stubborn Ellard caught by Rowe at mid-off for 14,  by which time Civil had moved on to a heady 61 for 3.  Rusling bowled R.Yates for a duck; Griffiths trapped Smith lbw, bowled danger man Reed for 34 and then trapped A. Yates lbw with his next delivery as Civil collapsed.  Griffiths and Rusling (4 for 31) polished off the rest between them.  Quentin Thwaites completed his hat trick of good catches at mid-on.

The target of 82 to win in 56 overs was ideally suited to Sydenham and Thwaites- masters of the forward defensive shot.  They got off to a heady start scoring at an average of 3 runs per over, with Sydenham the main aggressor cracking three fours in his innings of 20.  The pair put on 35 before Sydenham edged spinner Mallet to keeper Reed who caught the ball and whipped off the bails with Civil appealing like mad.  Umpire Cliff Lowe was unmoved but Sydenham walked, having given himself out caught behind.  Publican Thwaites went in a similar manner, edging to the keeper and calling time on himself for 10.

There followed the customary mid-innings wobble- Darren Colegate appeared briefly and was stumped off Mallett.  Roger Newcombe soon dispatched a couple of balls to the boundary but bottom edged Mallett  (3 for 20) in the air to deep backward square leg.  Darren Rowe (18 not out) and Chris Life (7 not out) stopped the rot and steered the thirds home to a welcome second victory of the season.