What a week it’s been 4 League wins out of four and 3 centurians.

However, for many of us the highlight of the week was the second annual Sea Change match competing for the Puerto de Indias Cup.  Following last year’s tie both sides were hoping to raise the trophy this year. 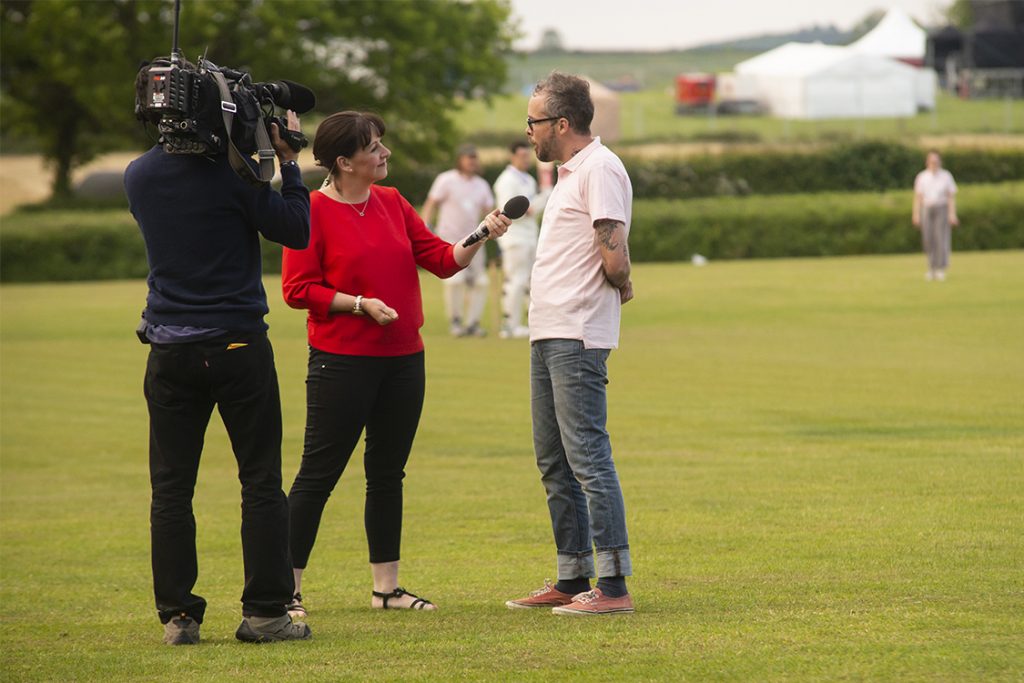 So Rupert what’s your plan to remove the Chairman?

The match took place in a festive atmosphere with a decent crowd with music and an amusing live commentary.   The commentator modestly claimed to know little about cricket but his commentary suggested otherwise.  Gavin and Phil did sterling work on the BBQ and Andy and AJ put in a marathon bar shift.  So well did they do that Andy had to re-stock the bar at 10pm!

The Sea Change XI included Baxi and Chevy along with 3 members of Metronomy- Joe, Anna and Michael and James Shepherd of Harberton and possibly Bovey Tracey CC .   Anna impressed as much in the field as she did the following night with the drumsticks.

At the beginning there had been a lot of standing around with not a lot a happening, eventually their skipper, Rupert (Morrison -no relation to the Supermarket chain), arrived and we agreed to play 16 overs (virtually the same as the new ECB 100 ball competition starting shortly). 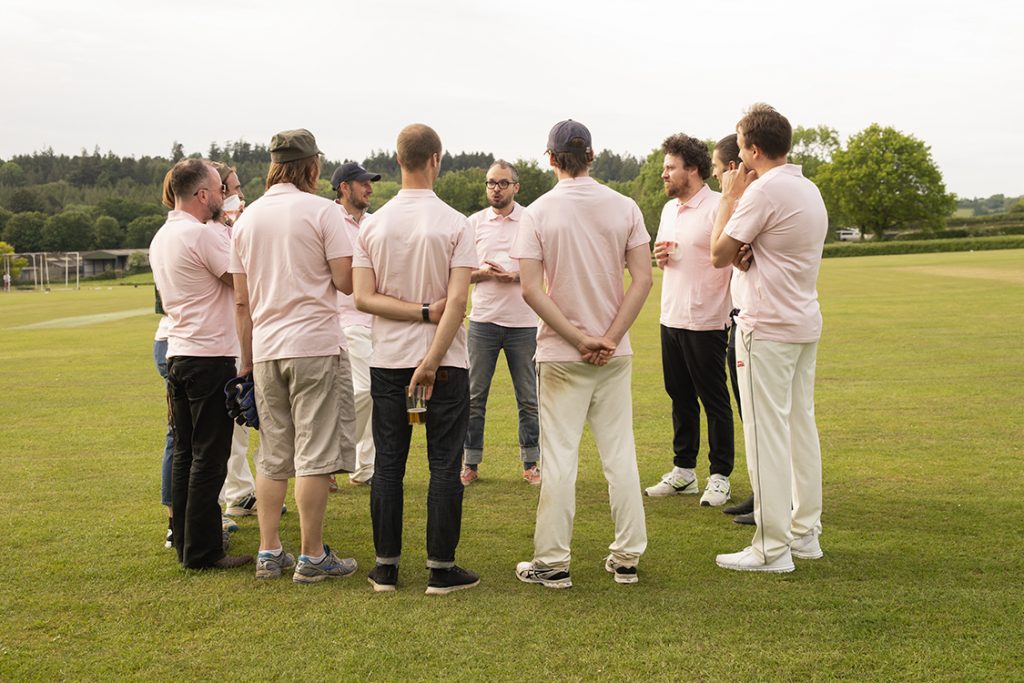 I was asked to captain the home side and, fed up with finely crafted innings of 0 not out, I decided to invoke ‘droit de signeur’ and opened the batting with Jon.

Rupert opened the bowling for Sea Change, Jon took a good look at him before cracking his final delivery for a straight 6. I’d hoped they would start with a few gentle pies and save the good bowlers for our better batsmen but James Shepherd came roaring in at me in the next over.   I didn’t have much trouble keeping him out but scored only one run off the over and  realised I needed to score runs or let someone else have go, so went onto the attack, effectively utilising an old favourite shot- an outside edge through the slips (my fans will be familiar with my other shot). 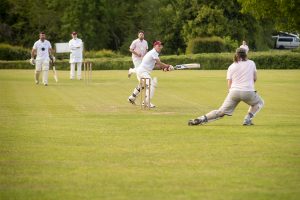 After taking 10 off Shepherd’s next over I holed out to short mid-wicket off the bowling of Metronomy man Mount, who may not have bowled since he was at school.  I scored 13 which amazingly was the same score I made when I previously opened, in a Sunday League match against Shaldon about 15 years ago- spooky or what?   Surprisingly, once I was out the run rate didn’t change much remaining at about 6 per over. 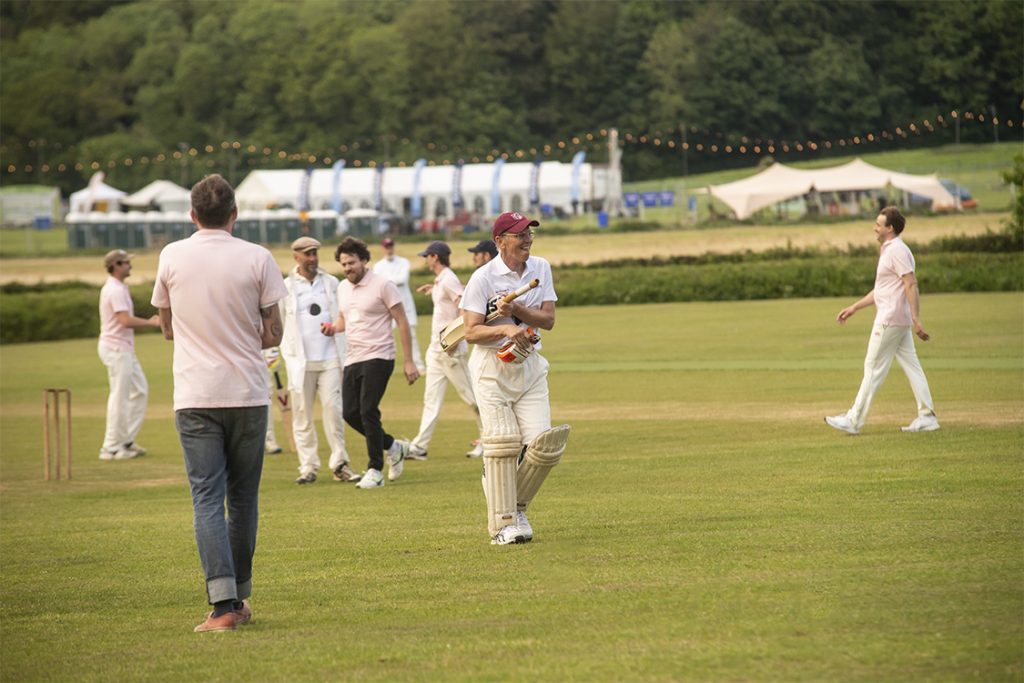 Jubilation for Sea Change as the D&T danger man departs

Jon and Joe Parker batted well before both were retired after passing 25.  Jon was clearly enjoying himself and his disappointment upon being retired was clear when he wrapped his bat around my neck.  Alex Hartridge, the Exeter City starlet, is probably the club’s best nets player (taking the dubious distinction from Andy).  He can biff the ball to all parts for fun, unfortunately, he was stumped for 1 and did not appear to be taking the game as seriously as he might.   (“See me in my study Hartridge”) 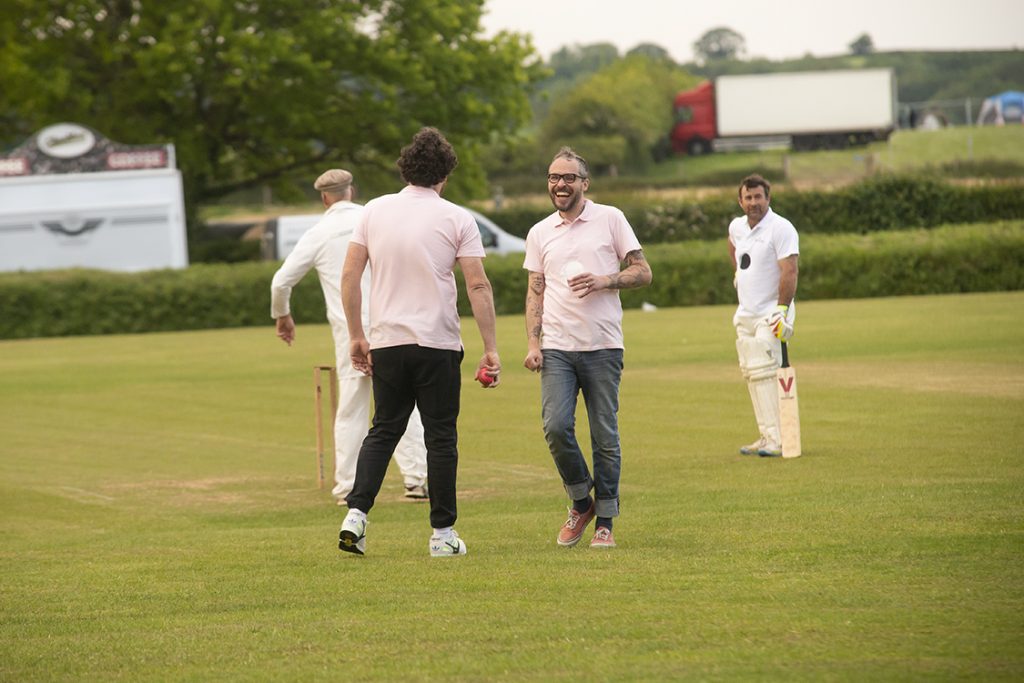 Joe and Rupert having a laugh at Cookie’s Arnold Gumby impersonation.

I was gently criticised for the batting order but the problem was nobody seemed to want to pad up.

Baxi and Chevy came on at the end and we failed to apply the long handle enough.  Keld batted as though playing in a timeless test and appeared semi-comatose when easy singles were on offer.  His doziness may be explained by sleepless nights with his new baby,  but at least he caught up on some sleep whilst at the crease.  Big hitters Phil Power (the commentator loved his name) and Alex Perkin came in, but we ran out of overs.   97 for 4 didn’t seem like a big enough score and it wasn’t. 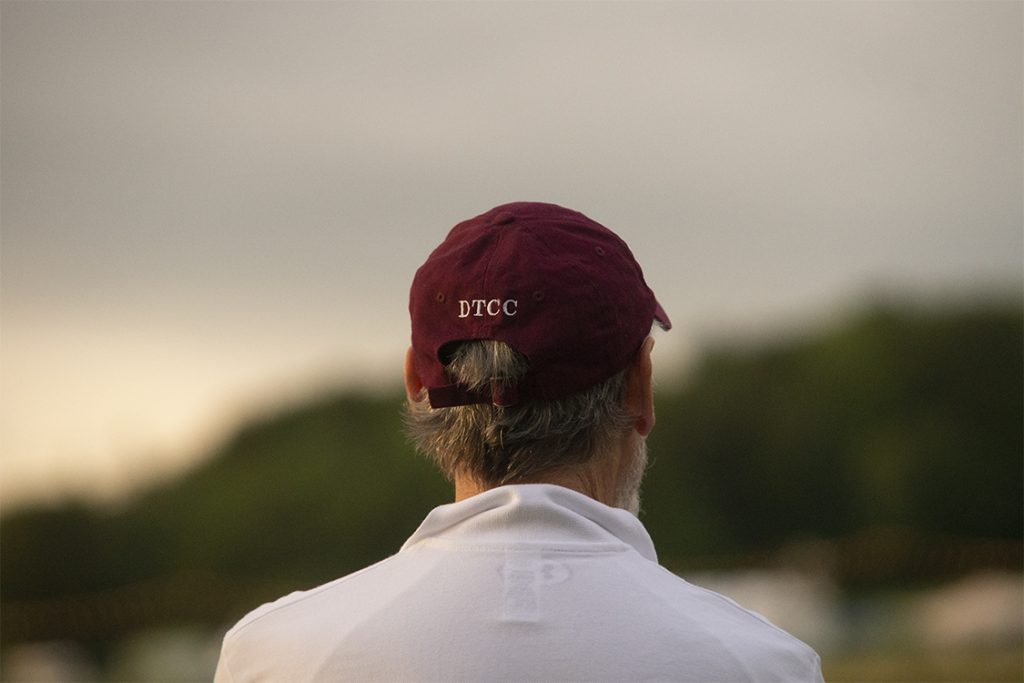 Sea Change got off to a fast start, just what we didn’t need. 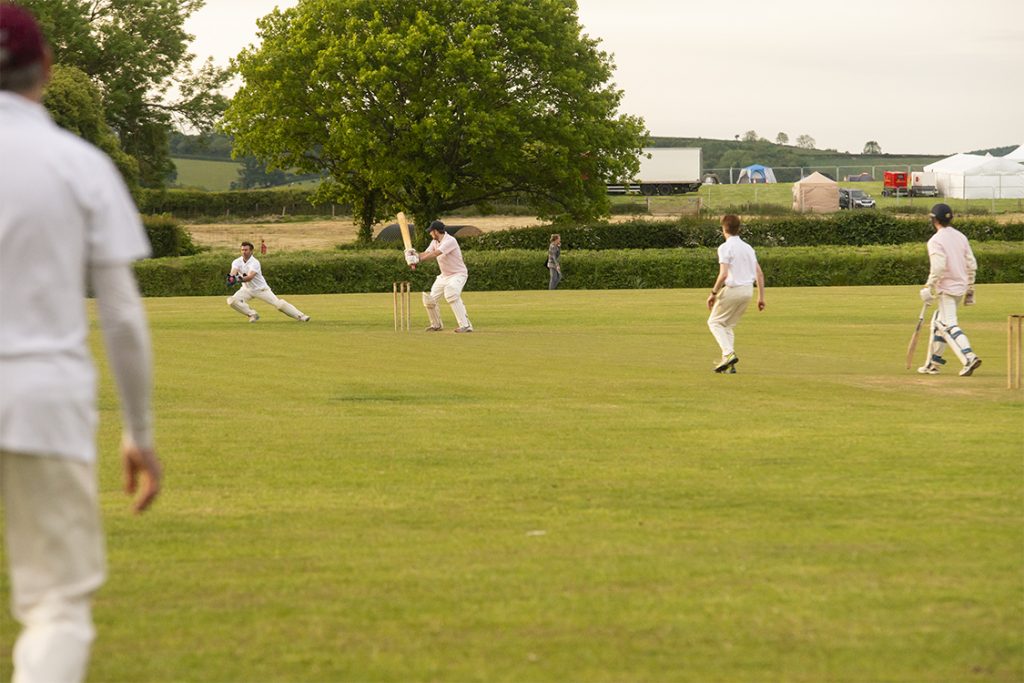 Finlay Porter was bowling quick but struggled for accuracy.

Chris Cook bowled steadily and took a wicket.  Shepherd Retired at 30, Glenn had Baxi caught for 16.  Alex Hartridge came into the attack and produced an ambidextrous spell, bowling right- handed at Baxi and Chevy ‘Maurice’ Chevallier, but left handed against everyone else.   They couldn’t score off him and he took the marquee wicket of Joe ‘Metronomy’ Mount who was unable to pay back the 50 runs he owed his skipper. (For the uninitiated or just those not playing with a full set of stumps, this is a play on one of Metronomy’s album titles) 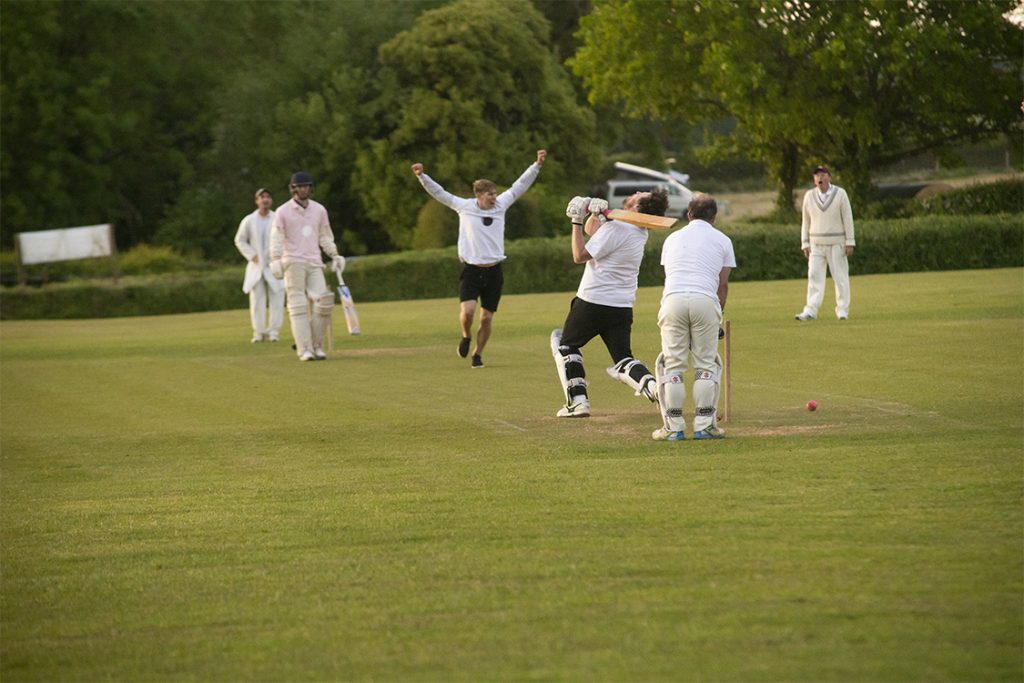 A jubilant Hartridge captures the marquee wicket of Mount 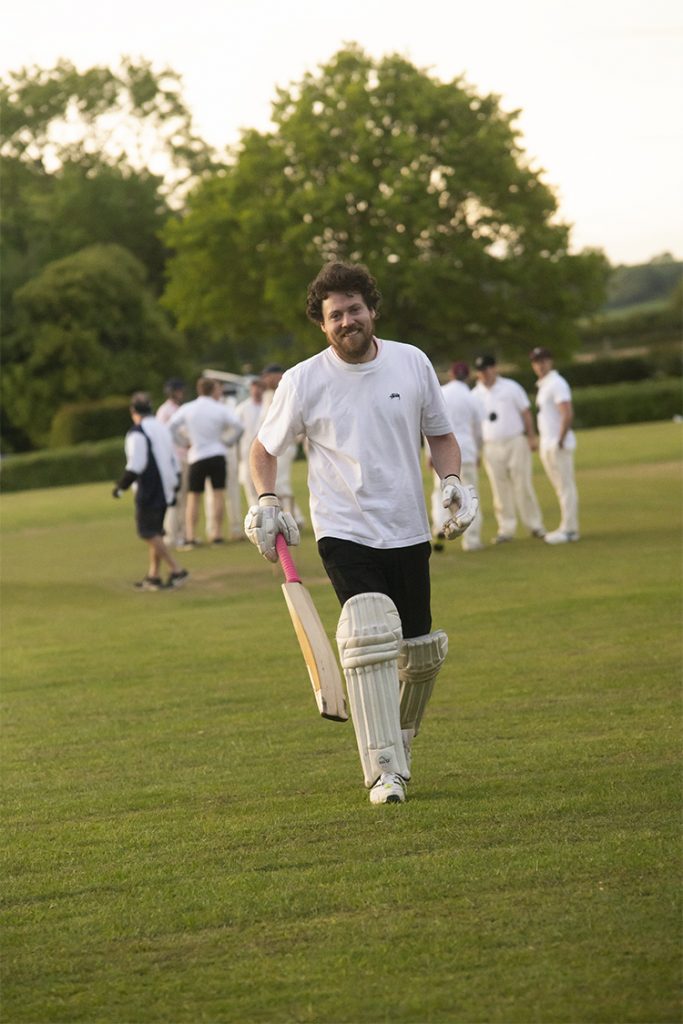 Joe receiving a hero’s welcome from his adoring fans

Chevy came in and scored 25 and Sea Change won comfortably with 4 overs to spare. 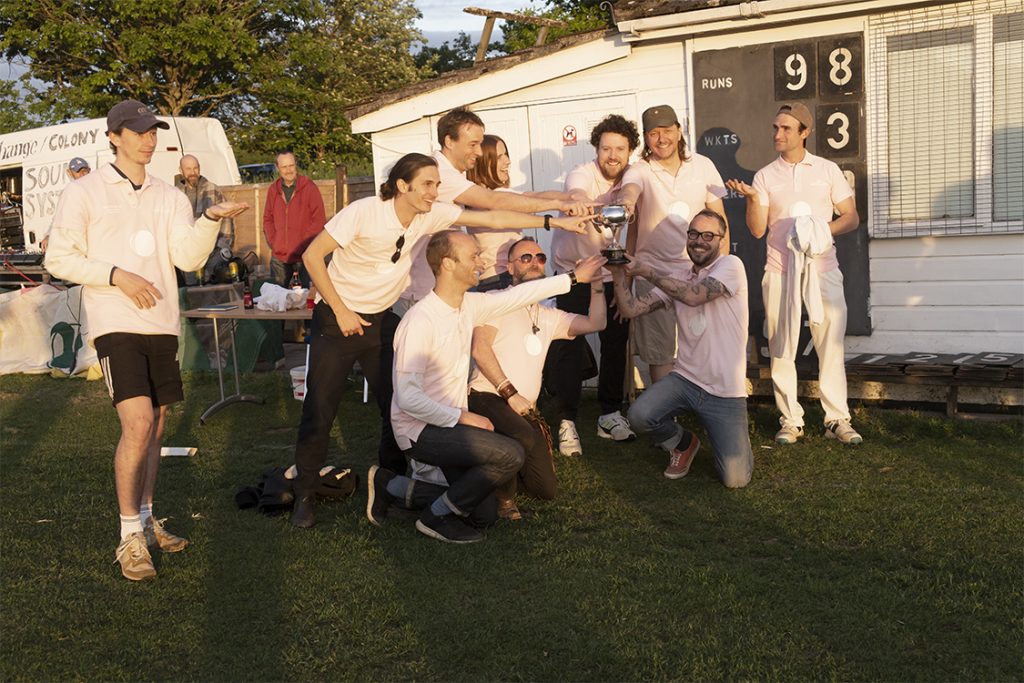 I presented Rupert with the Cup and made a short congratulatory speech which Chris said was both robotic and formulaic or something like that. 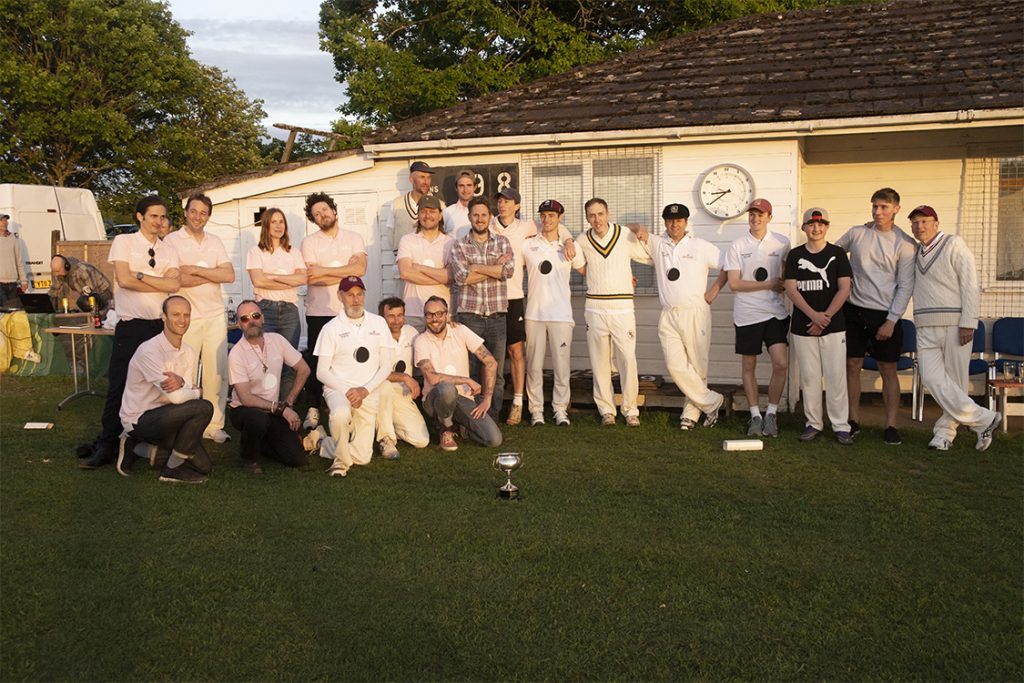 However, the fun was just beginning, the DJ was playing music, people were dancing up a storm.  As the night wore on the DJ moved inside the Club along with his huge borrowed sound system, which he insisted on playing at full volume.   I don’t know what the Disco was called but he should have been called Burst Eardrums or Totally Devastated Tympani.   The punters danced on, seemingly oblivious to the fact they would all be deaf within 20 years.   It’s amazing what substances can do for you!  The bar staff were unable to hear orders and the punters mimed what they wanted- a sort of alcoholic charades.

Endnote:  The cricket had a peculiar effect on Joe M as on the following evening he appeared to have developed an American accent.  In spite of this the music was terrific.

Thanks to Rupert for arranging the fixture.

Looking forward to next year already.