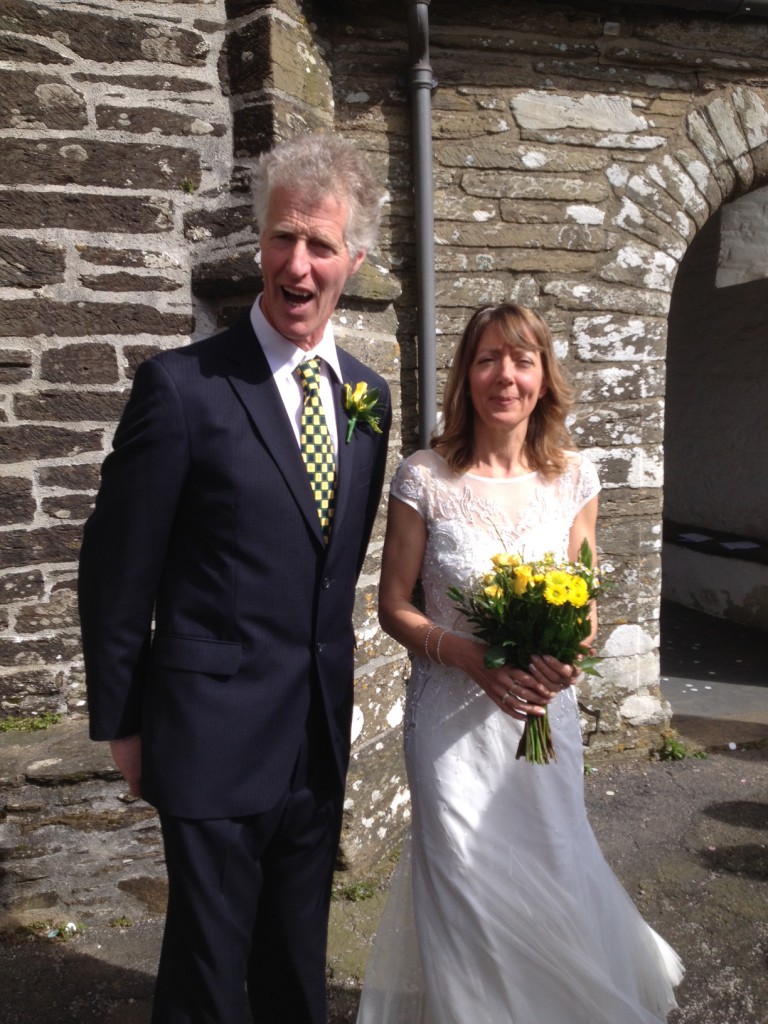 Dartington & Totnes’ Mr Cricket, Harold Stevenson, having bowled his maiden over, took her to the altar at Cornworthy Church on Saturday, writes our Society correspondent.

The wedding was attended by several fine cricketers, and also Mick.

Renowned for his meticulous attention to detail Harold had arranged for the sun to shine down on the occasion.  As is his wont, he arrived at the church early with his team of best men, sons Scott and Ryan, and he soon put them through their paces with some gentle warm up exercises.  The whole Stevenson clan oozed sartorial elegance but Harold looked particularly sharp in  a blue striped suit and striking yellow tie.  He was in fine form from the off and was clearly relishing the occasion with an obvious spring in his step.  Several people commented that he had ‘scrubbed up well’.

Sue arrived looking radiant; it was all going according to plan.  However, she may soon have thought she had arrived at the wrong wedding since the vicar referred to the groom as ‘Richard’. Puzzled members of the congregation were relieved that the vicar was merely referring to Harold by his first name of Richard- hence the repeated ‘Richarding’ by the vicar.  One wag said it was fortunate that Harold’s first name wasn’t Roger.

There was the usual tense moment when the vicar asked if anyone knew of any impediment to the couple marrying and there was a noticeable sigh of relief after this.

The final hymn included the lyric “give me oil in  my lamp, keep me burning” and, being reminded of lead in pencils, we wondered if this was Harold or Sue’s sense of humour or  perhaps was H suffering from performance anxiety?

Bertus was sighted in the Church but had disappeared by oil in the lamp time, prompting much speculation.  It turned out he was in charge of the hog roast and had merely been attending to culinary duties.  He was reported to have killed the pig himself and someone suggested that he’d probably strangled it, which seemed a bit harsh.

Branners graced the occasion with his presence and the Chairman sounded him out about his availability for the coming season.  It transpired he was living in Henley and had numerous torn muscles which nonetheless had not prevented him winning numerous squash matches.  Branners had received invitations to our winter nets at KEVICC and apologised for his non-attendance which he ascribed to the distance involved from Henley.

With the deed done the party repaired to a tent on Harold’s farm for the reception.  (In reality a finely decorated marquee)

Harold successfully navigated another potentially tricky moment with the cutting of the cake.  When asked to cut the cake he initially politely declined saying he specialised in pulling, had not brought his cricket bat and anyway wouldn’t it be a bit messy?

Ryan, celebrating both his own birthday and his father’s wedding, had jetted back from Barbados where he had been enjoying an arduous and ascetic pre-season with Hampshire CCC.  He allowed himself a break from his spartan regime to enjoy a glass of cider shandy.

For his going away out fit Harold wore a matching pair of overalls and wellies.