Sadly Dave passed away on 25th February at Rowcroft Hospice. Our thoughts are with his family.  Some of you will know that Dave has been stoically battling with illness for some time.  Sometimes the phrase ‘battling with cancer’ gets overused, but not with Dave, who approached his illness in typical obdurate fashion and despite considerable pain and discomfort carried on working for a long time.  He maintained his interest and support for the Club and was asking about our AGM, captains etc only a few days after he had had neurosurgery, a couple of weeks ago.

We were delighted when Dave agreed to present the awards at the Annual Dinner last September. He’s  pictured below with Ryan and Harold Stevenson.  Dave and Harold both played at Totnes for many years.  Harold said Dave was a great team player, would always be one of the first names on the teamsheet and would never let him down. 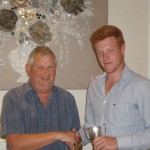 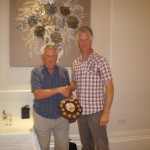 Dave’s last match for us was for the second XI in 2011 when he and Tom Petherick put on an undefeated 108  for the sixth wicket to win the match against Plymouth.  After this he helped us greatly by umpiring, despite being in some discomfort standing for 92 overs.

Dave’s stats for Totnes CC (from H’s archive) show that between 1973 and 1988 (other years not available) Dave’s figures were:

My first cricketing memory of Dave is as recent as 2005.  One sunday morning I watched England almost lose the second test to the Aussies before Kasprowicz was out 3 runs short of victory.  I thought it would be a long time before I saw another finish like that but in truth it happened later that day in a  friendly at Dartington.  Needing 163 to win we were 121 for 9 when Dave came in to bat with Arran Rusling.  With Dave displaying his sound technique the pair nursed the score ever closer before Dave, like Kasprowicz, was dismissed agonisingly close to victory-2 runs short.  Dave didn’t have Freddie Flintoff to console him as Brett Lee had but in truth he didn’t need it- Dave had been there before, done that….